The Iceman Says We Are All Superhuman

"I do not fear death. I fear not living fully." ~~ Iceman Wim Hof 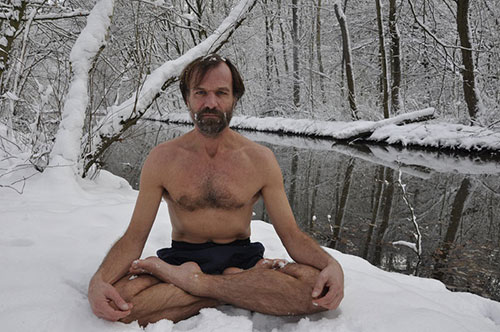 Iceman Wim Hof holds 20 world records, including the record for staying submerged up to his neck in an ice bath – almost two hours.

ABC News reported that in 2002, "dressed only in a swimsuit, he dove under the ice at the North Pole and earned a Guinness World Record for the longest amount of time swimming under the ice: 80 meters [262 feet]."

Scientists have closely studied this unusual Dutchman and verified that he has the highly rare ability to stay submerged in ice water for over an hour without significantly lowering his core body temperature.

The tragic death of Wim Hof's wife at an young age initially sent him spiraling deep into depression. Yet as a single father of four young children, he knew he had to carry on. His experiments immersing his body in ever more challenging frigid environments eased the depression and helped him to cope with his misfortune. Out of this incredibly adversity was born the iceman.

Yet possibly the most awesome thing about Wim Hof is that he says "What I do, anybody can do." Hof claims he has found and refined an untapped evolutionary potential that lies hidden inside every human body. If fact, through a combination of meditation, breathwork, and more, he has trained many dozens to do feats most people believe to be impossible.

Matt Shea of Vice set out to see if all this could possibly be true and made a fascinating, inspiring documentary of his life-changing experience. Watch this incredible 40-minute film at the link below:

For more on this most inspiring man, explore the links below. May we all open to the infinite possibilities that lie within each one of us.