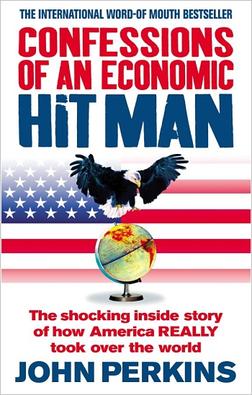 John Perkins was for many years one of the world's top economists. He worked directly with the heads of the World Bank, IMF, and other global financial institutions. He quit his work about 30 years ago because morally and ethically, he felt it was wrong to play such a key role in creating world empire at the expense of the poor and less advantaged around the world.

After being persuaded and even bribed not to write a book about his experiences, Perkins states, "When 9/11 struck, I had a change of heart." The book he wrote, Confessions of an Economic Hit Man, spent many weeks on amazon.com's bestseller list.

Below are a few links related to Confessions of an Economic Hit Man, followed by an excellent review. The first link allows you to purchase the book at amazon.com. The second and third are links to engaging interviews with Perkins. The excellent review (provided below) on this powerful book was written by another former member of the global financial elite, David Korten.

Perkins ends one radio interview by stating, "I believe the World Bank and these other institutions can be turned around... We can change that." Please help to bring about this change by reading this powerful book and informing your friends and colleagues.

With very best wishes for a transformed world,
Fred Burks for WantToKnow.info

Note: For an excellent seven-page summary of Economic Hitman, see this webpage.

Order Confessions of an Economic Hit Man on amazon.com

Confessions of Empire
How the Richest of the Rich Steal from the Poorest of the Poor
By David C. Korten

John Perkins was for 10 years a player in a high-stakes game of global empire. CONFESSIONS OF AN ECONOMIC HIT MAN is his very personal account of the events that forced him to choose between conscience and a glamorous life of power, luxury and beautiful women. It is also an adventure thriller worthy of Graham Green or John Le Carré that connects the dots between corporate globalization, American Empire, and the dynasty of the House of Bush.

During my own 30 years as a development worker in Africa, Latin America and Asia, I came to realize that the institutions of the aid system and the global economy persistently serve the interests of the rich at the expense of the poor. I sometimes wondered whether the outcome might have been orchestrated by some secret inner circle of power brokers who knew exactly what they were doing.

By Perkins' account, he was recruited and trained by just such a circle. He served their cause until he defected in a fit of conscience and, later, decided to spill the beans. Confessions tells stories of deals Perkins helped to broker with key oil exporting countries such as Indonesia, Saudi Arabia, Iran, Iraq, Venezuela, Ecuador and Colombia. Naming names, he explains in riveting detail exactly how the system works – and illuminates the reality behind the hostility of those the United States now condemns as terrorists.

Perkins' job as chief economist for Chas. T. Main, a secretive consulting firm with close ties to the U.S. intelligence and corporate communities, was much like that of an Enron accountant. He cooked the books in a gigantic international con game. More specifically, he produced and defended grossly inflated projections of economic growth that were then used to justify super-sized infrastructure projects financed with debts to foreign banks that could never be repaid.

Intentionally making unpayable loans to foreign governments may seem the work of fools, but the money flowed directly into the bottom lines of well-connected U.S. construction and energy companies like Bechtel and Halliburton, and the perpetual debts gave the U.S. government a stranglehold over the economic and political resources of the indebted nations.

The ruling classes of the debtor nations who benefited rarely objected; the people the projects displaced had no voice. Selling bogus projections was specialized work that required the social skills of a con man and the ethics of a hired killer. By Perkins' account, recruiters from the National Security Agency (NSA), one of the U.S. intelligence services, decided he fit the bill.

Of particular interest is Perkins' story of his role in the deal that tied Saudi Arabia to U.S. interests, created a financial and political alliance between the House of Saud and the House of Bush, and led to a partnership that channeled billions of dollars to Osama bin Laden. Under this agreement, the Saudis hold their oil earnings in U.S. Treasury bonds. The Treasury Department pays the interest on these bonds directly to favored U.S. corporations, with which it contracts to modernize Saudi Arabia's physical infrastructure. In return the U.S. government uses its political and military clout to keep the Saudi royal family in power.

According to Perkins, the Saudi agreement was to be a model for Iraq, but Saddam Hussein refused to play – which explains why George W. Bush was so intent on invading Iraq to remove him from office. The war was simply a different means to the same outcome. Effective control of Iraqi oil reserves was transferred to U.S. hands. Bechtel, Halliburton and other corporate Bush cronies received billions in new contracts.

Perhaps, as implied by Perkins' experience, the assault on the world's poor was orchestrated out of some super-secret NSA project office charged with recruiting and training economic hit men. Or perhaps it was the unintentional consequence of playing out elite interests. In the end it makes little difference. The power brokers and their minions win, and hundreds of millions of losers are left to choose between death and slavery. Either way, it's important to address the deeper cultural and institutional causes of what is a spreading global disaster. It's here that Perkins misses a key point.

"The fault lies not in the institutions themselves, but in our perceptions of the manner in which they function and interact with one another, and of the role their managers play in that process...," he writes. "Imagine if the Nike swoosh, McDonald's arches and Coca-Cola logo became symbols of companies whose primary goals were to clothe and feed the world's poor in environmentally beneficial ways."

Yes, the perceptions are important, but so are the institutions. Perkins should by now be aware of two historic truths: 1) Between the demands of financial markets and legal interpretations of the fiduciary responsibility of corporate officers, global for-profit corporations face strong pressures to maximize returns to their shareholders without regard to social or environmental consequences; and 2) Any unaccountable concentration of institutional power is an invitation to the very corruption he so skillfully documents.

David C. Korten is a former member of the financial elite and the esteemed author of When Corporations Rule the World and The Post-Corporate World: Life After Capitalism.

Note: Watch an excellent, engaging two-minute video summary of Perkins' story. And for an excellent seven-page summary of Economic Hitman, see this webpage.