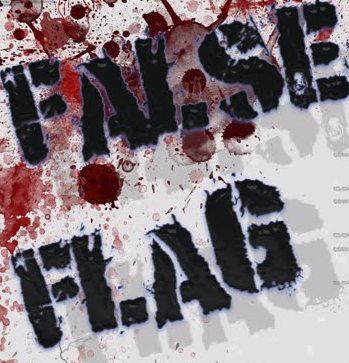 "False flag terrorism" occurs when elements within a government stage a secret operation whereby government forces pretend to be a targeted enemy while attacking their own forces or people. The attack is then falsely blamed on the enemy in order to justify going to war against that enemy. Or as Wikipedia defines it:

False flag operations are covert operations conducted by governments, corporations, or other organizations, which are designed to deceive the public in such a way that the operations appear as if they are being carried out by other entities. The name is derived from the military concept of flying false colors; that is, flying the flag of a country other than one's own. False flag operations are not limited to war and counter-insurgency operations, and have been used in peace-time; for example, during Italy's strategy of tension.

The term comes from the old days of wooden ships, when one ship would hang the flag of its enemy before attacking another ship in its own navy. Because the enemy's flag was hung instead of the flag of the real country of the attacking ship, it was called a "false flag" attack.

9/11 Note: For those wanting to explore the possibility of 9/11 as a false flag operation, click here.

There are many examples of false flag attacks throughout history. For example, it is widely known that the Nazis, in Operation Himmler, faked attacks on their own people and resources which they blamed on the Poles, to justify the invasion of Poland. And it has now been persuasively argued — as shown, for example, in this History Channel video — that Nazis set fire to their own parliament, the Reichstag, and blamed that fire on others. The Reichstag fire was the watershed event which justified Hitler's seizure of power and suspension of liberties.

And in the early 1950s, agents of an Israeli terrorist cell operating in Egypt planted bombs in several buildings, including U.S. diplomatic facilities, then left behind "evidence" implicating the Arabs as the culprits (one of the bombs detonated prematurely, allowing the Egyptians to identify the bombers). Israel's Defense Minister was brought down by the scandal, along with the entire Israeli government. Click here for verification.

The Russian KGB apparently conducted a wave of bombings in Russia in order to justify war against Chechnya and put Vladimir Putin into power (see also this essay and this report). And the Turkish government has been caught bombing its own and blaming it on a rebel group to justify a crackdown on that group. Muslim governments also play this game. For example, the well-respected former Indonesian president claimed that their government had a role in the Bali bombings.

This sounds nuts, right? You've never heard of this "false flag terrorism," where a government attacks its own people then blames others in order to justify its goals, right? And you are skeptical of the statements discussed above? Please take a look at these historical quotes:

"If tyranny and oppression come to this land, it will be in the guise of fighting a foreign enemy." - U.S. President James Madison

"Why of course the people don't want war ... But after all it is the leaders of the country who determine the policy, and it is always a simple matter to drag the people along, whether it is a democracy, or a fascist dictatorship, or a parliament, or a communist dictatorship ... Voice or no voice, the people can always be brought to the bidding of the leaders. That is easy. All you have to do is to tell them they are being attacked, and denounce the pacifists for lack of patriotism and exposing the country to danger. It works the same in any country." - Hermann Goering, Nazi leader.

What about the U.S.?

Is it logical to assume that, even if other countries have carried out false flag operations (especially horrible regimes such as, say, the Nazis or Stalin), the U.S. has never done so? Well, as documented by the New York Times, Iranians working for the C.I.A. in the 1950's posed as Communists and staged bombings in Iran in order to turn the country against its democratically-elected president (see also this essay).

And, as confirmed by a former Italian Prime Minister, an Italian judge, and the former head of Italian counterintelligence, NATO carried out terror bombings in Italy with the help of the Pentagon and CIA and blamed communists in order to rally people's support for their governments in Europe in their fight against communism. As one participant in this formerly-secret program stated: "You had to attack civilians, people, women, children, innocent people, unknown people far removed from any political game. The reason was quite simple. They were supposed to force these people, the Italian public, to turn to the state to ask for greater security."

Moreover, declassified U.S. Government documents show that in the 1960s, the U.S. Joint Chiefs of Staff signed off on a plan code-named Operation Northwoods to blow up American airplanes (using an elaborate plan involving the switching of airplanes), and also to commit terrorist acts on American soil, and then to blame it on the Cubans in order to justify an invasion of Cuba. The operation was not carried out only because the Kennedy administration refused to implement these Pentagon plans.

For lots more on the astonishing Operation Northwoods, see the ABC news report; the official declassified documents; and watch this interview with James Bamford, the former Washington Investigative Producer for ABC's World News Tonight with Peter Jennings. One quote from the the declassified Northwoods documents states: "A 'Remember the Maine' incident could be arranged: We could blow up a US ship in Guantanamo Bay and blame Cuba. Casualty lists in US newspapers would cause a helpful wave of national indignation."

You might think Al-Qaeda is different. It is very powerful, organized, and out to get us, right? Consider this Los Angeles Times article, reviewing a BBC documentary entitled The Power of Nightmares, which shows that the threat from Al Qaeda has been vastly overblown (and see this article on who is behind the hype). And former National Security Adviser Zbigniew Brzezinski testified to the Senate that the war on terror is "a mythical historical narrative."

And did you know that the FBI had penetrated the cell which carried out the 1993 World Trade Center bombing, but had – at the last minute – cancelled the plan to have its FBI infiltrator substitute fake powder for real explosives, against the infiltrator's strong wishes? See also this TV news report.

Have you heard that the CIA is alleged to have met with Bin Laden two months before 9/11? Did you know that years after 9/11 the FBI first stated that it did not have sufficient evidence to prosecute Bin Laden for 9/11? (See also this partial confirmation by the Washington Post) And did you see the statement in Newsweek by the CIA commander in charge of the capture that the U.S. let Bin Laden escape from Afghanistan?

Have you heard that the anthrax attacks – which were sent along with notes purportedly written by Islamic terrorists – used a weaponized anthrax strain from the top U.S. bioweapons facility? Indeed, top bioweapons experts have stated that the anthrax attack may have been a CIA test "gone wrong." For more on this, see this article by a former NSA and naval intelligence officer and this statement by a distinguished law professor and bioterror expert (and this one).

It is also interesting that the only Congress members mailed anthrax letters were key Democrats, and that the attacks occurred one week before passage of the freedom-curtailing PATRIOT Act, which seems to have scared them and the rest of Congress into passing that act without even reading it. And though it may be a coincidence, White House staff began taking the anti-anthrax medicine before the Anthrax attacks occurred.

Even General William Odom, former director of the National Security Agency, said "By any measure the US has long used terrorism. In ‘78-79 the Senate was trying to pass a law against international terrorism, yet in every version they produced, the lawyers said the US would be in violation" (the audio is here).

Why Does This Matter?

Please read what the following highly respected people are saying:

Former prominent Republican U.S. Congressman and CIA official Bob Barr stated that the U.S. is close to becoming a totalitarian society and that elements in government are using fear to try to bring this about.

Republican U.S. Congressman Ron Paul stated that the government "is determined to have martial law." He also said a contrived "Gulf of Tonkin-type incident may occur to gain popular support for an attack on Iran." Former National Security Adviser Brzezinski told the Senate that a terrorist act might be carried out in the U.S. and falsely blamed on Iran to justify yet another war.

The former Assistant Secretary of the Treasury in the Reagan administration, Paul Craig Roberts, who is called the "Father of Reaganomics" and is a former editor and columnist for the Wall Street Journal, BusinessWeek, and Scripps Howard News Service, has said:

"Ask yourself: Would a government that has lied us into two wars and is working to lie us into an attack on Iran shrink from staging 'terrorist' attacks in order to remove opposition to its agenda?"

Retired 27-year CIA analyst Ray McGovern, who prepared and presented Presidential Daily Briefs and served as a high-level analyst for several presidents, stated that if there was another major attack in the U.S., it would lead to martial law. He went on to say:

"We have to be careful, if somebody does this kind of provocation – big violent explosions of some kind – we have to not take the word of the masters there in Washington that this was some terrorist event because it could well be a provocation allowing them, or seemingly to allow them to get what they want."

The former CIA analyst would not put it past the government to "play fast and loose" with terror alerts and warnings and even terrorist events in order to rally people behind the flag.

General Tommy Franks stated that if another terrorist attack occurs in the United States "the Constitution will likely be discarded in favor of a military form of government." Former UN Weapons Inspector Scott Ritter stated before the Iraq war started that there were no weapons of mass destruction. He is now saying that he would not rule out staged government terror by the U.S. government. And British Parliament Member George Galloway stated that "there is a very real danger" that the American government will stage a false flag terror attack in order to justify war against Iran and to gain complete control domestically.

The abundance of reliable information in this essay suggests that not only has the U.S. in the past conducted false flag operations, but there is a possibility that 9/11 involved some element of this deceit, and a future false flag operation cannot be ruled out. Let us spread this news to all who care so that we might build the critical mass necessary to stop these secret operations and work together for a more caring civil society.

Special Note: For a collection of reliable, verifiable information suggesting that 9/11 may have been a form of false flag operation, please see the 9/11 Information Center available at this link. For a list of more false flag terrorism operations with links for verification, see this webpage.