As of Mar. 26, we're $5,600 in the red for the year. Please donate here to support this vital work.
Subscribe here to our free email list for two information-packed emails per week. 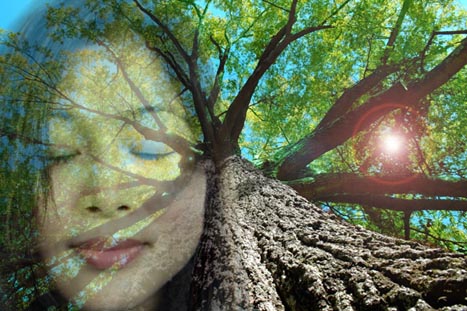 All of us are born into a "tribal mentality" of various forms. These include our family unit, religious background, country of origin, ethnicity, etc. The tribal mentality effectively indoctrinates an individual into the tribe's beliefs, ensuring that all believe the same.

The structure of reality – what is and is not possible for the members of the group – is thus agreed upon and maintained by the tribe.

While the tribal mentality has definite benefits in terms of establishing common ground and ensuring group survival, it is not a conscious agreement. We are born into it. Yet at a certain stage, both personally and collectively, the tribal mentality must be challenged. People can then begin to recognize the need for a personal honor code independent of the tribe. If humanity is to progress, we need to learn how to treat everyone – regardless of tribal affiliation – with honor and respect.

Every one of us is plugged into the tribal mind. We support tribal belief patterns by directing a percentage of our life force into maintaining our affiliation with the tribe. This involves an implicit agreement to think like the tribe thinks, to evaluate situations and people the way the tribe does, and to believe in right and wrong according to tribal values and ambitions. As long as the tribal mentality within us remains unexamined, we unwittingly subject others to our tribal laws.

When we are plugged into tribal thought forms, we can easily believe in nonsensical prejudices held by the tribe. Tribal mentality allows us to hold harsh, judgmental positions or attitudes about an entire group of people: "All fat people are lazy," or "all Irish are drunks," or "all Muslims are terrorists" for example.

A rigid tribal thought form may have little truth to it, but individuals hold to such beliefs because that perspective is what the tribe has agreed to believe. Innocent children, born into the hatred and prejudice of their parents and ancestors, grow up inside a tribal mentality that sponsors an endless march toward war against the tribe's perceived enemies. People grow up hating other people – people they have never seen – based on group affiliation. This is the shadow side of the tribe.

Inevitably, some among us come to a point where we want to break out of the inflexible tribal mentality. At some point, these individuals want to explore, develop, and manage their own consciousness without the judgments and limitations of the tribal mind.

It is easy to spot these mavericks when they start to question and unplug from tribal mentality – they hang out on the periphery looking bored and restless, or whimsical and dreamy. Others may act out the agitated hot-head as they challenge tribal ways.

The unspoken assumption of the tribal mind is that everybody loves being part of the tribe. And in many ways, we do. Knowing where and to whom we "belong" is crucial to our self-concept and sense of safety in the world. Yet when we begin the real deep journey of questioning, "What do I believe?" and start to individuate from the tribe, we often enter a dark night of the soul. It is, by necessity, a passage we take alone.

It's one thing to reject what we don't want to believe anymore. It's quite another to begin to explore what we do believe. All we know as we enter the dark night is that we can't go back – even when the tribe is the only world we've ever known.

At this critical point in our development, the tribe doesn't feel right anymore. It no longer offers us comfort. Previous feelings of security and familiarity begin to feel like a trap constraining our individuality and hampering our efforts to discover deeper levels of who we really are.

This dark night passage pushes us to look at our false gods – the tribal belief patterns in which we've become invested and to which we've given our allegiance.

The Language of Wounds

Divorce and financial information were also considered very intimate. People would almost never talk about such matters, or about their inner life and emotions. They talked only about the details of what was going on in their external lives. The tribal mentality at the time kept people from revealing intimate matters or deep wounds or traumas even with their family and close friends.

The current age of personal therapy has brought about a very different situation. Now, the tribal mentality has shifted such that we not only share our intimate feelings more openly and willingly, many have even begun to define themselves by their wounds. Let me give an example of how this phenomenon plays itself out.

I was in an Indian restaurant in Scotland talking with two men friends when the woman friend I was to meet for dinner walked up and greeted the three of us. After I had introduced her, another man walked over and asked if she was free on June 8th, as he thought she might like to attend a lecture on that date. The question required little more than a ‘yes' or a ‘no' answer.

Instead of a simple answer, she began an elaborate discussion about June 8th. "Did you say June 8th? No, no. Any other day would be fine, but not June 8th. That's the day my incest survivor group meets and I have to be there because we never let each other down." She went on and on for at least a full minute with this.

Later, I asked her, "Do you realize that in that brief introduction, you told two men whom you have never met before that 1) you had experienced incest, 2) you were still in therapy about it, 3) you were angry about it, 4) you were angry at men, and 5) you needed to determine the course of the conversation – all in one minute?"

She replied, "Well, I am a victim of incest."

To which I replied, "I know that. Why did you have to let them know that?"

People now get together in support group tribes that function within many of the same rigid frameworks of ethnic, national, or family tribes. Some feel that the comfort and security of belonging to a group or tribe is more important than venturing alone in the direction of real healing.

The tendency toward tribalism can keep us stuck in repeating negative cycles in our intimate relationships, and can wreak havoc when a relationship is ripe for transition. Tribal mentality often teaches a righteous stance in relationships: an eye for an eye, and a tooth for a tooth. When we feel violated, the first thought is vengeance, rather than forgiveness.

Tribal mentality even has gender-specific undercurrents – women do vengeance differently than men. Yet for both genders, what rules the day is the tribal mentality that holds "breaking up is painful" or "betrayal warrants retaliation."

Healing revolves around this crucial question: "Do you want to make different choices?" Are we willing to let go of old, constricting tribal patterns? Sadly, the answer quite often is "No." Being healthy isn't always the most appealing option. Quite frankly, in many cases, it's not appealing at all. What is most appealing is being out of pain. Old patterns are difficult to relinquish because they do serve to relieve pain, even if it is only in the short run.

Change is terrifying for many precisely because short-term pain relief must be given up. Deep healing requires learning to tolerate the pain that comes with change. Fortunately, the growing pains that come with new behavior – with making the choices that will change your life – are often short-lived.

Thought alone doesn't heal. Nor does action without thought. For deep healing to occur, we need the chemistry of conscious thought and direct action combined. Every thought or attitude we have – whether consciously chosen or unconsciously adopted through the tribal mind – invests a part of our life-force into that thought or attitude. This is true whether the thought is one of betrayal and vengeance, or of understanding and forgiveness.

What matters is that a whole system of consciousness – the old tribal mentality – no longer holds us enthralled. We no longer have faith in those limiting patterns of thought. Through this transformation we learn a whole new level of trust. We break the habit of telling tribal lies which bring short-term comfort but long-term pain. We develop a new sense of self-worth and of trust and honor.

In spite of all the heavy tribal conditioning, we now have hope because tribal mentality the world over is going through a vast transformation. And each one of us can play a vital role in this transformation.

With increasing numbers of individuals changing and transcending limiting tribal beliefs, the codes of the tribe are being affected. As we collectively change and evolve, the tribes around us gradually change and evolve with us. Yet ultimately, the journey upon which we are embarking is an incredible solo flight of transcending the tribe to find our own trust, honor, and new sense of self-worth and meaning in life.

Note: Caroline Myss (http://www.myss.com) is a medical intuitive, and author of numerous books and audio tapes, including three New York Times best sellers. The above is an edited excerpt of her essay titled "Leaving the Wounded Relationship Tribe," taken from a compilation of essays by various authors in the enlightening book, The Marriage of Sex & Spirit, edited by Geralyn Gendreau.