As of Dec 8, we're $10,100 in the red for the month. Donate here to support this vital work.
Subscribe here to our free email list for two information-packed emails per week. 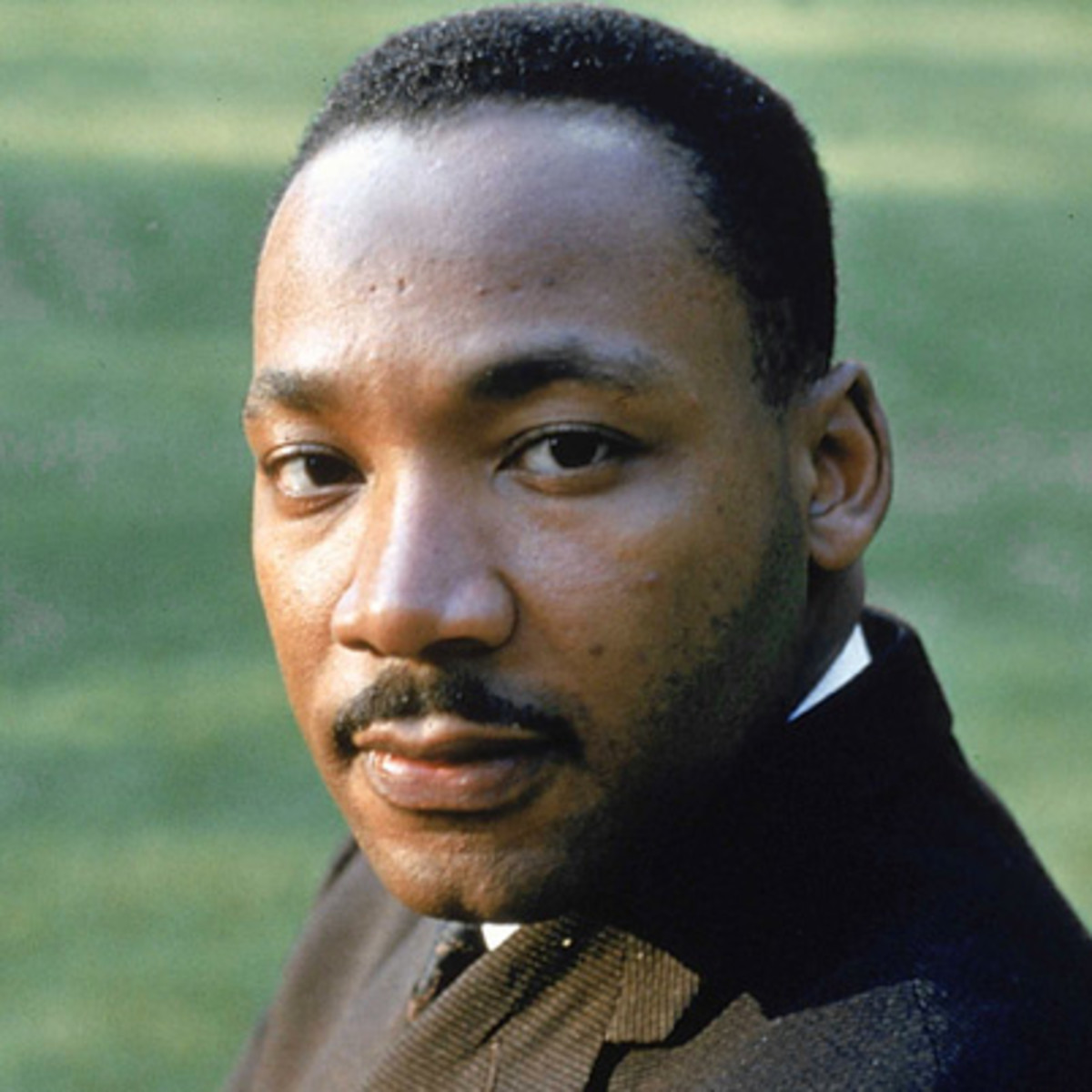 "The ultimate weakness of violence is that it is a descending spiral, begetting the very thing it seeks to destroy. Instead of diminishing evil, it multiplies it. Through violence you may murder the liar, but you cannot murder the lie, nor establish the truth. Through violence you murder the hater, but you do not murder hate. In fact, violence merely increases hate. Darkness cannot drive out darkness; only light can do that. Hate cannot drive out hate; only love can do that."
-- Martin Luther King, Jr., quote from his 1967 book Where Do We Go From Here?

In honor of Nobel Peace Prize winner Martin Luther King, Jr., who was assassinatined on April 4, 1968, you will find here key quotes and links to numerous audio and video clips of this great, visionary leader of the last century. Excerpts are given from two of Dr. King's most moving speeches, "I Have a Dream" and "I've Been to the Mountain Top."

I most highly recommend clicking on one of the links below to experience the way this great man's voice could so powerfully touch and move people. Let us open to these most inspiring words and allow them to move us to work together to powerfully build a brighter future for all who share our beautiful planet.

With very best wishes for a transformed world,
Fred Burks for PEERS and WantToKnow.info
Former language interpreter for Presidents Bush and Clinton

I Have A Dream
By Dr. Martin Luther King Jr.

Delivered by Martin Luther King, Jr. at the Lincoln Memorial in Washington D.C. on Aug. 28, 1963

The whirlwinds of revolt will continue to shake the foundations of our nation until the bright day of justice emerges. But there is something that I must say to my people who stand on the warm threshold which leads into the palace of justice. In the process of gaining our rightful place we must not be guilty of wrongful deeds.

Let us not seek to satisfy our thirst for freedom by drinking from the cup of bitterness and hatred. We must forever conduct our struggle on the high plane of dignity and discipline. We must not allow our creative protest to degenerate into physical violence. Again and again we must rise to the majestic heights of meeting physical force with soul force.

I have a dream that one day this nation will rise up and live out the true meaning of its creed: "We hold these truths to be self-evident: that all men are created equal." I have a dream that one day on the red hills of Georgia the sons of former slaves and the sons of former slaveowners will be able to sit down together at a table of brotherhood.

This will be the day when all of God's children will be able to sing with a new meaning, "My country, 'tis of thee, sweet land of liberty, of thee I sing. Land where my fathers died, land of the pilgrim's pride, from every mountainside, let freedom ring." And if America is to be a great nation, this must become true.

I've Been To The Mountain Top
By Dr. Martin Luther King Jr.

Delivered April 3, 1968 in Memphis, Tennessee by Dr. Martin Luther King, Jr.
This was Dr. King's last speech before he was assassinated the following day.

Several years ago, I was in New York City autographing the first book that I had written. And while sitting there autographing books, a demented black woman came up. The only question I heard from her was, "Are you Martin Luther King?" And I was looking down writing, and I said yes. And the next minute I felt something beating on my chest.

Before I knew it I had been stabbed by this demented woman. I was rushed to Harlem Hospital. It was a dark Saturday afternoon. And that blade had gone through, and the X-rays revealed that the tip of the blade was on the edge of my aorta, the main artery. And once that's punctured, you drown in your own blood – that's the end of you. It came out in the New York Times the next morning, that if I had sneezed, I would have died.

Well, about four days later, they allowed me – after the operation, after my chest had been opened, and the blade had been taken out – to move around in the wheel chair in the hospital. They allowed me to read some of the mail that came in. And from all over the states, and the world, kind letters came in. I read a few, but one of them I will never forget. I had received one from the President and the Vice-President. I've forgotten what those telegrams said. I'd received a visit and a letter from the Governor of New York, but I've forgotten what the letter said.

But there was another letter that came from a little girl, a young girl who was a student at the White Plains High School. And I looked at that letter, and I'll never forget it. It said simply, "Dear Dr. King: I am a ninth-grade student at the White Plains High School." She said, "While it should not matter, I would like to mention that I am a white girl. I read in the paper of your misfortune, and of your suffering. And I read that if you had sneezed, you would have died. And I'm simply writing you to say that I'm so happy that you didn't sneeze."

And I want to say tonight ... that I am happy that I didn't sneeze. Because if I had sneezed, I wouldn't have been around here in 1960, when students all over the South started sitting-in at lunch counters. And I knew that as they were sitting in, they were really standing up for the best in the American dream. [They were] taking the whole nation back to those great wells of democracy which were dug deep by the Founding Fathers in the Declaration of Independence and the Constitution.

It really doesn't matter what happens now. I left Atlanta this morning, and as we got started on the plane, there were six of us, the pilot said over the public address system, "We are sorry for the delay, but we have Dr. Martin Luther King on the plane. And to be sure that all of the bags were checked, and to be sure that nothing would be wrong with the plane, we had to check out everything carefully. And we've had the plane protected and guarded all night."

And then I got to Memphis. And some began to say the threats, or talk about the threats that were out. What would happen to me from some of our sick white brothers? Well, I don't know what will happen now. We've got some difficult days ahead.

But it doesn't matter with me now. Because I've been to the mountaintop. And I don't mind. Like anybody, I would like to live a long life. Longevity has its place. But I'm not concerned about that now. I just want to do God's will. And He's allowed me to go up to the mountain. And I've looked over. And I've seen the promised land.

I may not get there with you. But I want you to know tonight, that we, as a people, will get to the promised land. And I'm happy, tonight. I'm not worried about anything. I'm not fearing any man. Mine eyes have seen the glory of the coming of the Lord.

Read the entire text of Dr. Martin Luther King's inspirational "I've Been to the Mountain Top" speech. Watch the full 45-minute audio of this inspiring speech with video accompaniment. Listen to a song by rock band U2 titled "In the Name of Love" and written as a tribute to this great man.

You can find an abundance of inspiring information on Dr. Martin Luther King's life and work in the Wikipedia entry available here. Below is an amazing, little-known excerpt from this Wikipedia entry describing a 1999 Memphis court trial involving a lawsuit by the King family questioning who was involved in the assassination of Dr. King. The U.S. media completely failed to cover this riveting trail and it's most astonishing outcome.

"In 1999, Coretta Scott King, King's widow (and a civil rights leader herself), along with the rest of King's family, won a wrongful death civil trial against Loyd Jowers and "other unknown co-conspirators". Jowers claimed to have received $100,000 to arrange King's assassination. The jury of six whites and six blacks found Jowers guilty and that "governmental agencies were parties" to the assassination plot. William Pepper represented the King family in the trial."

Mr. Pepper later wrote a highly revealing book, An Act of State, detailing what the U.S. press refused to present. The trial lasted four weeks and produced over seventy witnesses, yet the media gave virtually no coverage to the entire, highly revealing trial. The jury took less than an hour to find in favour of the King family. Explore the full transcript of this key trial. And watch an excellent seven-minute CBC (equivalent of Canada's PBS) clip of this highly revealing trial which found the U.S. government intimately involved in Dr. Martin Luther King, Jr.'s assassination.

Note: For an excellent collections of quotes, speeches, and audio and video clips of some of the most inspiring leaders of our time including Dr. King, see http://www.writespirit.net