As of Dec 5, we're $10,600 in the red for the month. Donate here to support this vital work.
Subscribe here to our free email list for two information-packed emails per week. 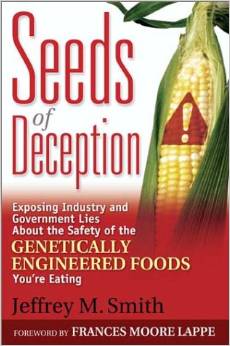 Jeffrey M. Smith, the most well-known researcher of genetically modified organisms (GMOs) and foods, has written the definitive exposé on the grave risks and dangers of GMOs in his engaging book Seeds of Deception. This is one of very few books that have the potential to awake the general public to grave risks and dangers of GMOs. It is both a fascinating read and very well documented.

For an excellent 10-page summary of the book, click here. Below is a shorter article in which Mr. Smith which reveals the depth and severity of this huge health risk. Please help to spread this vital news far and wide.

With best wishes for an awakened public,
Fred Burks for PEERS and WantToKnow.info

In a study in the early 1990's rats were fed genetically modified (GM) tomatoes. Well actually, the rats refused to eat them. They were force-fed. Several of the rats developed stomach lesions and seven out of forty died within two weeks. [1] Scientists at the FDA who reviewed the study agreed that it did not provide a "demonstration of reasonable certainty of no harm." In fact, agency scientists warned that GM foods in general might create unpredicted allergies, toxins, antibiotic resistant diseases, and nutritional problems.

Internal FDA memos made public from a lawsuit reveal that the scientists urged their superiors to require long-term safety testing to catch these hard-to-detect side effects. [2] But FDA political appointees, including a former attorney for Monsanto in charge of policy, ignored the scientists' warnings. The FDA does not require safety studies. Instead, if the makers of the GM foods claim that they are safe, the agency has no further questions. The GM tomato was approved in 1994.

According to a July 27, 2004 report from the US National Academy of Sciences (NAS), [3] the current system of blanket approval of GM foods by the FDA might not detect "unintended changes in the composition of the food." The process of gene insertion, according to the NAS, could damage the host's DNA with unpredicted consequences. The Indian Council of Medical Research (ICMR), which released its findings a few days earlier, identified a long list of potentially dangerous side effects from GM foods that are not being evaluated. The ICMR called for a complete overhaul of existing regulations. [4]

The safety studies conducted by the biotech industry are often dismissed by critics as superficial and designed to avoid finding problems. Tragically, scientists who voice their criticism, as well as those who have discovered incriminating evidence, have been threatened, stripped of responsibilities, denied funding or tenure, or fired. [5]

For example, a UK government-funded study demonstrated that rats fed a GM potato developed potentially pre-cancerous cell growth, [6] damaged immune systems, partial atrophy of the liver, and inhibited development of their brains, livers and testicles. [7] When the lead scientist went public with his concerns, he was promptly fired from his job after 35 years and silenced with threats of a lawsuit.

Americans eat genetically modified foods everyday. Although the GM tomato has been taken off the market, millions of acres of soy, corn, canola, and cotton have had foreign genes inserted into their DNA. The new genes allow the crops to survive applications of herbicide, create their own pesticide, or both. While there are only a handful of published animal safety studies, mounting evidence, which needs to be followed up, suggests that these foods are not safe.

Soon after GM soy was introduced to the UK, soy allergies skyrocketed by 50 percent. [14] Without follow-up tests, we can't be sure if genetic engineering was the cause, but there are plenty of ways in which genetic manipulation can boost allergies.

The only human feeding study ever conducted showed that the gene inserted into soybeans spontaneously transferred out of food and into the DNA of gut bacteria. [20] This has several serious implications. First, it means that the bacteria inside our intestines, newly equipped with this foreign gene, may create the novel protein inside of us. If it is allergenic or toxic, it may affect us for the long term, even if we give up eating GM soy.

The same study verified that the promoter, which scientists attach to the inserted gene to permanently switch it on, also transferred to gut bacteria. Research on this promoter suggests that it might unintentionally switch on other genes in the DNA – permanently. [21] This could create an overproduction of allergens, toxins, carcinogens, or antinutrients. Scientists also theorize that the promoter might switch on dormant viruses embedded in the DNA or generate mutations. [22]

Unfortunately, gene transfer from GM food might not be limited to our gut bacteria. Preliminary results show that the promoter also transferred into rat organs, after they were fed only a single GM meal. [23]

This is only a partial list of what may go wrong with a single GM food crop. The list for others may be longer. Take for example, the corn inserted with a gene that creates its own pesticide. We eat that pesticide, and plenty of evidence suggests that it is not as benign as the biotech proponents would have us believe.

Preliminary evidence, for example, shows that thirty-nine Philippinos living next to a pesticide-producing cornfield developed skin, intestinal, and respiratory reactions while the corn was pollinating. Tests of their blood also showed an immune response to the pesticide. [24] Consider what might happen if the gene that produces the pesticide were to transfer from the corn we eat into our gut bacteria. It could theoretically transform our intestinal flora into living pesticide factories.

GM corn and most GM crops are also inserted with antibiotic resistant genes. The ICMR, along with the American Medical Association, the WHO, and organizations worldwide, have expressed concern about the possibility that these might transfer to pathogenic bacteria inside our gut. They are afraid that it might create new, antibiotic resistant super-diseases. The defense that the biotech industry used to counter these fears was that the DNA was fully destroyed during digestion and therefore no such transfer of genes was possible. The human feeding study described above, published in February 2004, overturned this baseless assumption.

No one monitors human health impacts of GM foods. If the foods were creating health problems in the US population, it might take years or decades before we identified the cause. One epidemic in the 1980's provides a chilling example. A new disease was caused by a brand of the food supplement L-tryptophan, which had been created through genetic modification and contained tiny traces of contaminants. The disease killed about 100 Americans and caused sickness or disability in about 5-10,000 others. [25] The only reason that doctors were able to identify that an epidemic was occurring, was because the disease had three simultaneous characteristics: it was rare, acute, and fast acting. Even then it was nearly missed entirely.

Studies show that the more people learn about GM foods, the less they trust them. [26] In Europe, Japan, and other regions, the press has been far more open about the potential dangers of genetic manipulation. Consequently, consumers there demand that their food supply be GM-free and manufacturers comply. But in the US, most people believe they have never eaten a GM food in their lives [27] (even though they consume them daily).

Lacking awareness, complacent consumers have been the key asset for the biotech industry in the US. As a result, millions of Americans are exposed to the potential dangers, and children are most at risk. Perhaps the revelations in the reports released on opposite sides of the planet will awaken consumers as well as regulators, and GM foods on the market will be withdrawn.

© Copyright 2004 by Jeffrey M. Smith. Permission is granted to publishers and webmasters to reproduce this article. Please contact [email protected] to let us know who you are and what your circulation is, so we can keep track.

Jeffrey M. Smith is the author of Seeds of Deception: Exposing Industry and Government Lies about the Safety of the Genetically Engineered Foods You're Eating, and the Director of the Institute for Responsible Technology.

Important Note: For an excellent 10-page summary of Jeffreys's most excellent book on the risks and dangers of GMOS, click here. To become more informed of the dangers of GM foods, to access an excellent Action Tool Kit, and to learn how to avoid buying and eating GM foods, see Mr. Smith's excellent website of The Institute for Responsible Technology. You can also sign up for their quality, free newsletter there.