Coronavirus: How Dangerous is it?

The coronavirus is spreading. Official Johns Hopkins statistics state that more than 1.5 million have died around the world and many more are dying every day. Caution is clearly warranted to protect our health and that of our loved ones Yet consider this important data.

This CDC webpage reports U.S. annual statistics; "Influenza has resulted in between 9 million – 45 million illnesses ... and between 12,000 – 61,000 deaths annually since 2010." This CDC webpage further states, "between 291,000 and 646,000 people worldwide die from seasonal influenza-related respiratory illnesses each year."

Since it first began spreading in December last year, the coronavirus is said to have taken over 300,000 lives in the U.S.. That is certainly an alarming number, especially as it continues to grow. This is about five times the amount of deaths from the regular flu in a bad season in the U.S.. Worldwide the number of deaths is stated as over 1.5 million, three times the number of deaths from the regular flu. So is this virus as dangerous as the media would have us believe?

Most people are well aware that the media makes money through publicizing tragedies and focusing on bad news. Fear sells. "If it bleeds, it leads." Fear-filled news makes money for corporate sponsors of the media, and the more fear generated, the greater the profits. So when a new virus results in any significant number of deaths, it's only natural that major media around the world hype it up with fear-mongering. They continually spotlight the worst hit areas and bring public focus there while giving scant attention to how well some areas are doing. Look how much attention this virus has already drawn. How much has the media gotten you focused on this pandemic?

Governments have also contributed to spreading fear. An article in the U.K.'s Guardian spells out how government officials promulgated fear-filled pronouncements at the time of the 2009 swine flu. The U.K.'s chief medical officer stated on BBC that "65,000 could die" in Britain. Yet once the flu had run its course, the article continues, a total of only "360 people have died under its influence, most with prior 'non-flu' conditions." That's less than 1/100th of what this official had predicted.

Another glaring example can be found in this eye-opening 2009 CBS article that states, "If you've been diagnosed 'probable' or 'presumed' 2009 H1N1 or 'swine flu' in recent months, you may be surprised to know this: odds are you didn't have H1N1 flu. In fact, you probably didn't have flu at all." The article goes on to show how the U.S. government's CDC blatantly manipulated numbers to induce fear.

With the current heightened level of fear, many who experience even mild symptoms of the flu are deeply concerned that they might have the coronavirus. So they immediately go to the hospital only to find it jammed packed with others who have flu-like symptoms, when – even if they do have a virus – the vast majority of these people have only a common version of the flu. The overwhelm in the hospitals then gets spotlighted by the media, further exacerbating the level of fear, even though the hospital overwhelm has little relation to the relatively few numbers who actually have coronavirus. So panic reigns even when the real threat is much less than feared.

Why did China lock down the entire city of Wuhan (population 11 million) and it's surrounding areas? Consider that with it's one-party system, China is one of the most controlled and surveilled countries in the world. Chinese citizens are not allowed to access facebook and thousands of other websites which might "contaminate the thoughts" of their people. Could it be that China used this virus as a huge social experiment in crowd control? Was this used as an effort to see how much how much control China's communist party could generate through all the fear mongering?

Consider also how the swine flu, avian flu, and SARS all drew widespread fear. The whole world was in deep fear that one or all of these diseases was going to kill many millions worldwide. These "pandemics," the media warned, could even cause large parts of the world to be quarantined. Yet in the end for all of these, the number of deaths worldwide was far less than those for the normal flu. 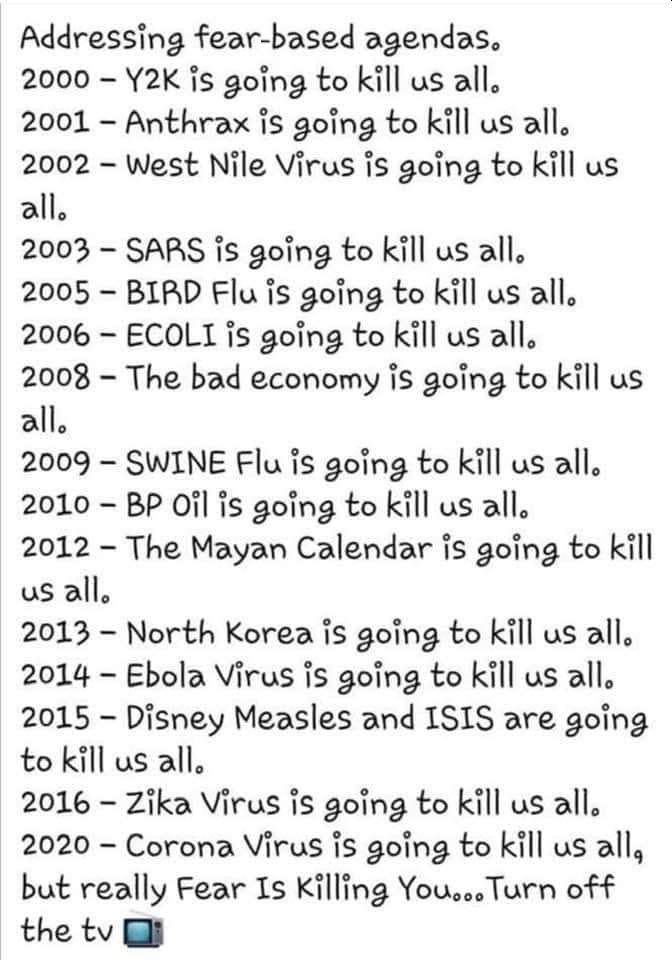 The media and certain corporations and individuals profit handsomely from all this fear. Pharmaceutical stocks soar during disease outbreaks that get huge publicity. Gilead Sciences made money hand over fist with its sales of Tamiflu during the avian and swine flu scares. According to this Washington Post article on the swine flu, "The WHO's response caused widespread, unnecessary fear and prompted countries around the world to waste millions of dollars. [They] relied on advice from experts with ties to drug makers in developing the guidelines it used to encourage countries to stockpile millions of doses of antiviral medications."

This 2014 Reuters article states, "Researchers who have fought for years to get full data on Roche's flu medicine Tamiflu said ... that governments who stockpile it are wasting billions of dollars on a drug whose effectiveness is in doubt." And further, "The United States has spent more than $1.3 billion buying a strategic reserve of antivirals including Tamiflu, while the British government has spent almost 424 million pounds ($703 million) on a stockpile of some 40 million Tamiflu doses."

The vast majority of those Tamiflu reserves were never used. Even after the shelf-life of the drug was extended from five to seven years, that huge stock of Tamiflu is now all expired, so the billions of dollars spent worldwide on Tamiflu during the avian and swine flu scares were wasted. Yet Roche/Gilead happily pocketed most of that in profit that we as tax-payers paid for.

To add another twist, an article in the U.K.'s respected newspaper, The Independent stated, "The drug Tamiflu, given to tens of thousands of people during the swine flu pandemic, does nothing to halt the spread of influenza and the Government wasted nearly £500 million stockpiling it, a major study has found." The article continues, "The review, authored by Oxford University, claims that Roche, the drug’s Swiss manufacturer, gave a 'false impression' of its effectiveness and accuses the company of 'sloppy science.'" And the side effects nearly killed a number of children.

Did you know that former U.S. Secretary of Defense Donald Rumsfeld, who was once chairman of the board at Gilead, personally made a windfall of $5 million from sales of Tamiflu? This was reported in the U.K.'s respected newspaper, The Independent, on March 12, 2006.

Though there is certainly reason to be concerned, there are other reasons to suspect that the real risks from this coronavirus outbreak are being significantly exaggerated and people are being manipulated into a position of fear that actually benefits big Pharma and some politicians. For summaries of the best major media articles raising serious questions around the coronavirus, see this highly revealing webpage with abundant links for verification of the claims made.

Watch a most excellent video of a New York City pulmonologist who has been on the front lines of treating thousands describe the real risks and dangers of this epidemic.

If this information raises questions about how and why all of this is happening, remember that fear is used by many groups, corporations, and even governments to gain greater control and reap immense profits. Explore an excellent two-page essay titled "Creating a New Paradigm," which shows how and why we are controlled through fear, and – more importantly – what we can do about it. By educating ourselves and spreading the word, we can rise above the fear mongering and make a difference in our world. Thanks for caring.

Resilience Guide for Coronavirus Times
1) Check-in so you don't check-out – be mindful of when you feel afraid and overwhelmed and how that might affect your ability to balance your thinking with different perspectives.
2) Question what you read – don't fall for the old maxim "if it bleeds, it leads!"
3) Follow the money. Who is profiting both financially and politically from this pandemic?
4) Find the people in your life who can question WITH you what part of the narrative is being left out.
5) Practice self-care – any activity, hobby or way of eating that helps you remember your best self. We need to feel well in order to think well.
6) Physical distancing does not mean social distancing. Crisis brings out the humanity in us so that we are closer and more connected than ever. We are all in this together.
7) Recognize that crisis can be a powerful opportunity for learning and growth. And we always have a choice between fear and love. Let us acknowledge any fear that arises, yet then choose love.

Note: This penetrating essay explores the long-term implications for humanity of the coronavirus and the choices we have right now. This excellent video interview features a scientist who specializes in viruses. He has examined the genome released by the Chinese government in search of the origins of the coronavirus. His solid investigation suggests that it was created in a laboratory. A wealth of excellent information on the coronavirus is also available here and here.